Why are we here? 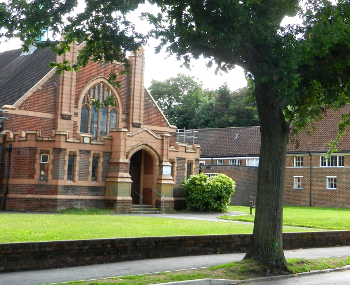 St Andrew’s is a Christian Church and part of the United Reformed Church. We are here to serve the community and to offer a place of Christian worship open to all.

St Andrew’s congregation as individuals and as a church strives:

In the early 1920s, when Cheam was beginning to be developed from a village among fields to become a suburb of London, a board was set up almost in the middle of nowhere, proclaiming that a Presbyterian Church of England was to be built there. Thus nine pioneers with foresight ensured that the church was there to welcome the first residents of the new houses as they were built.

The small nucleus worshipped once a month in a private house for three years until in 1927 the hall was built. This we now know as the Miles Hall, named after our first minister whose spirit of infectious enthusiasm quickly drew larger and larger numbers to the services. Within 3 or 4 years the congregation, which had outgrown the hall, set about building the church. This was to be a ‘teaching church of modern design full of light and fresh air with no suggestion of gloom’. The small congregation then shouldered what was for those days the tremendous task of raising £15 000. July 1933 saw the great feat accomplished when the church was dedicated and opened for public worship.

Steady progress was made until the war. Despite a depletion in numbers caused by young people being called up for the Armed Services, and the evacuation of children, Sunday worship was maintained. Our War Memorial reminds us that twenty one of our members made the supreme sacrifice.

The Church that Grew might rightly be the theme of the years following the war - adult membership grew and the increase in the size of the Sunday School was dramatic. Additional accommodation was urgently needed. Thus it was that the Tweddle Hall, named after the first Session Clerk, was opened in 1956, to be followed by the larger Aitken Hall and classrooms in 1964. Our premises were then complete in the form of a letter E. Church House adjoining the Church in The Avenue was bought in 1941 and a new manse in 1945. The Scout Hut was presented and erected in 1961 and the present manse, in Burdon Lane, was bought in 1999.

After the peak years of the 1960s our membership gradually fell in common with many other churches to today’s level of around 100.

The church is the people, not the buildings, but our facilities are the focus of our church family not only on Sundays but throughout the week as can be seen in the section on Church fellowship.

St Andrew’s has been very fortunate in being served by a succession of ministers of great ability. They have all been very different personalities but each has brought gifts which had been right for their particular time. We are delighted that the Revd Craig Bowman was appointed as minister of St Andrew’s and our sister church in Wallington in November 2019, and look forward to his leadership in the coming years.