How to get to St Andrew’s

St Andrew’s is located in Cheam in the southwest of Greater London. We are in Northey Avenue, Cheam, on the corner of The Avenue. Our postcode is SM2 7HF. We are at the red church symbol on the map to the rightabove.

By car or bicycle

From the east we are most easily approached from the A217 Belmont Rise (the Sutton bypass). Coming south from Cheam Village, Northey Avenue is a right turn at the first traffic lights. There is a small sign indicating St Andrew’s URC. Go along Northey Avenue, proceeding straight on (cautiously!) at the mini-roundabout, and the church is on your left a block further on. There is a car park at the far end of the church complex and unrestricted on-street parking.

From the west take the A232 from the Ewell Bypass, and at the first roundabout take the second exit. Proceed along Northey Avenue about ¾ mile, and the church is on your right.

Trains run from London Victoria, Sutton, West Croydon, Epsom and points in between to Cheam station. Exit on the ticket office side of the station, go straight ahead and turn left at the T-junction into Upper Mulgrave Road. Just before this goes under a bridge, turn right into Manor Road; follow Manor Road until it merges with Burdon Lane, follow Burdon Lane to the mini-roundabout, turn right and the church is 100 yards on your left. It’s about a 10 minute walk from the station. Train times from National Rail Enquiries. 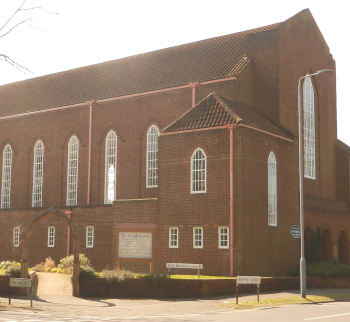 This is what you’re looking for

Several buses from Sutton, Worcester Park, Kingston and further afield go to Cheam Village. From there walk south on Station Road, under the railway bridge, and take the third on the left which is The Avenue and leads you right to the church. Again, this takes about 10 minutes. Details from TfL Journey Planner.

The 470 bus, which goes from Colliers Wood and Sutton to Epsom via Northey Avenue will stop right at the church, but it only runs Monday to Saturday and the last bus is around 8pm. For details see the timetable.

These codes are different ways of representing our location.