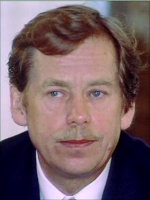 A while back I came across a piece from Václav Havel, the playwright who became president of the post communist Czech Republic. Havel said that many had told him that America had much to teach his people, and indeed those with a history of freedom and the building of institutions to maintain and improve on that freedom, did have much to teach those newly freed from the bonds of communism.

But at the same time, he said, he and his people had much to teach America and the rest of the world. Sitting alone in a prison cell for months and years, people have a lot of time to think. They had insights and understandings of life that could be a treasure to many others – that were treasures to them and which they would not want to lose.

It would be wrong to compare the restrictions we have been living with for these past months with the imprisonment and suppression of Havel and others under the communist regimes of the last century and other ideologies in this century. However, having to spend time limited to a particular place and with restricted interaction with others will have provided some of us with more time to think and reflect. I hope that some have managed to find this a gift which provides treasure in their lives and, by sharing it, enriches the lives of others too.

Back to Havel and the warning that we shouldn’t neglect those who may not readily be regarded as having something to offer. Our world tends to want to learn (perhaps tends to think we can only learn) from ‘winners’. Yet, if we think that, we have a lot to learn, especially from Jesus of Nazareth, the stone whom the builders rejected, and whom perhaps more Christians still reject without realising it. This world wants power, not lowliness; it wants the victory of the belligerent, not love; it looks for force, not forgiveness.

But that isn’t the way of Christ. Jesus is the ‘stone that the builders rejected’. Just the repetition of that phrase ought to bring us up short, settle us down, humble us, and make us willing - when we gather before the cross on Sunday mornings, and when we turn back to a world where so many live in the shadow of that same cross - willing to learn from those the world thinks losers.

The Apostle Paul put it in other words: ‘For God’s foolishness is wiser than human wisdom, and God’s weakness is stronger than human strength.’ In a world that seeks strength and domination, we are reminded that God works in a different way.

May God bless us all, ‘winners’ and ‘losers’,
Craig Bowman